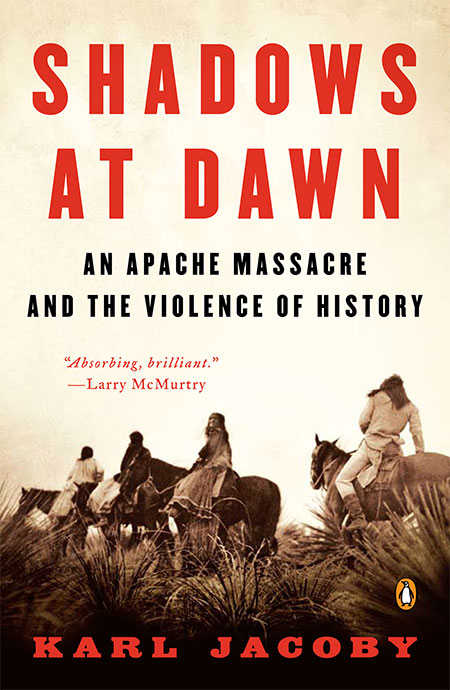 “Shadows at Dawn is an absorbing, brilliant study of the Camp Grant Massacre in 1871. Karl Jacoby sees this terrible event in its full complexity. His is one of the best studies ever of the long conflict between tribes and races, soldiers, citizens, killers and victims, in the wild unregulated Southwest.”

“In this landmark book about a tragic collision of multiple cultures, Karl Jacoby subverts a thousand Westerns by showing us that the West was not a sepia- toned world of cowboy or Indian, villain or hero, white hat or black. The West so carefully re-imagined in Shadows at Dawn was a far more complicated place—a place that lived and died in a surprising gamut of hues.”

“Shadows at Dawn is the fascinating story—actually four stories, a Southwestern Rashomon—of the massacre of Apaches near Tucson on April 30, 1871, by Anglos, Mexicans, and other Indians. Extending over four hundred years, centering on that awful event, this book is impressively researched and a major contribution to the history of clashing cultures and memories of the desert frontier.”

Walter Nugent, author of Habits of Empire: A History of American Expansion

“Jacoby’s story-teller’s ear listens to the tales that have swirled around the Camp Grant Massacre since the spring of 1871 and draws them into a conversation that—like it or not—is long overdue. Studied with a cool eye and open heart, the perspectives merge into a kaleidoscopic vision of the American West that remind us that we may be done with the past, but it is seldom done with us.”

“A brilliant narrative writer and gifted historian, Karl Jacoby rescues the Camp Grant massacre not simply from the forgetfulness of the past but from the all- too-human urge to simplify the tangled complexity of our motivations, interactions, histories, and memories. This book should be required reading for polemicists and apologists alike, and for anyone wanting to think deeply and well about the meanings of that curious thing we call ‘history.’”

“Shadows at Dawn is western history at its best! Karl Jacoby has judiciously uncovered the many hidden layers as well as legacies behind one of the darkest moments in America’s past—the ethnic cleansing of its indigenous peoples. In the process, he restores the Camp Grant Massacre to its rightful place at the center of Arizona’s traumatic 19th century past. A wonderful and moving achievement.”

Ned Blackhawk, author of Violence Over the Land: Indians and Empires in the Early American West

A Borderlands Massacre and the Violence of History

In the predawn hours of April 30, 1871, a combined party of Americans, Mexicans, and Tohono O’odham Indians gathered just outside an Apache camp in the Arizona borderlands. At the first light of day they struck, murdering nearly 150 Apaches, mostly women and children, in their sleep. In its day, the atrocity, which came to be known as the Camp Grant Massacre, generated unparalleled national attention—federal investigations, heated debate in the press, and a tense criminal trial. This was the era of the United States’ “peace policy” toward Indians, and the Apaches had been living on a would-be reservation, under the supposed protection of the U.S. Army. President Ulysses Grant decried the act as “purely murder,” but American settlers countered that the distant U.S. government had failed to protect them from Apache attacks, and they were forced to take justice into their own hands.

In the past century, the massacre has largely faded from memory. Now, drawing on oral histories, newspaper reports, and the participants’ own accounts, prizewinning author Karl Jacoby brings this horrific incident and tumultuous era to life. What brought this party together on that fateful April morning, and what led them to commit such a stunning act of violence? Shadows at Dawn traces the escalating conflicts, as well as the alliances, that transpired among the Americans, Mexicans, Apache, and Tohono O’odham living in the borderlands over the course of several hundred years, beginning with the seventeenth-century arrival of the first Spanish missionaries. The American presence brought further transformations, especially after the Gadsden Purchase transferred a large swath of Mexican territory to the United States, leaving many Mexicans feeling like foreigners in their own land. By recounting the events from the perspective of each of the four parties involved, Jacoby challenges the dominance of the American version of the western story and also reveals the way each group has remembered, or forgotten, the massacre.

Prodigiously researched and powerfully written, Shadows at Dawn examines a forgotten atrocity and in doing so paints a sweeping panorama of the southwestern border lands—a world far more complex, culturally diverse, and morally ambiguous than the traditional portrayals of the Old West.

Read the Introduction to Shadows at Dawn (PDF)